Ty Rosa Boutique B&B on PinkUk No1 Hind Stile Boutique BnB website
This advert has been viewed 215,530 times since 30 April.
Would you like your advert here?

states/regions in Greece that have gay saunas 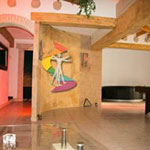 Updated:
17 Jul 2019
Vinci Gay Sauna has a cosy atmosphere in the community of friends. Nice evening conversations. Chilly relax while watching TV or the physical exercises on the Yogamattress. Candlelight in the [...]
More info on Vinci Gay Sauna

Other venues in Cyprus: Pubs | Saunas