Esmale Limited on PinkUk ESMALE, Gay Adult Super Store website
This advert has been viewed 275,241 times since 16 June 2020.
Would you like your advert here?

The Paranormal Finding Hauntings has been on many investigations, from private homes, to castle ruins. We are keen to explore more and find more challenges. On our investigations you will have the opportunity to use our equipment and be a front line [...]

We have 1 Towns/Cities in Lancashire.

Updated: 27 Sep 2020
Infusion is Blackpool's leading swingers club for like minded adults. Established in 2005, We are the largest purpose built swingers club in the Northwest of England. The ground floor consists of an [...]
More info on Infusion 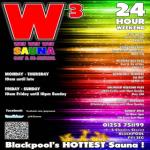 Updated: 15 Mar 2020
Gay Run Welcome to W3 Sauna... Blackpools Gay Sauna Blackpools most talked about spa boasts facilities that other saunas can only dream of. It's state of the art facilities include a steam room, [...]
More info on W3 Sauna