Popper Super Shop on PinkUk    POPPERS SALE UK ONLY website
This advert has been viewed 889,256 times since 09 November 2020.
Would you like your advert here?

We have 1 Towns/Cities in Belfast. 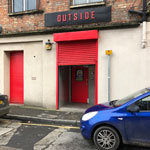 Updated: 29 Aug 2021
Outside Sauna Belfast, Ireland’s biggest event specialist. Northern Ireland’s only Gay Sauna. Right in the heart of LGBT district of Belfast, a place for gay and bi-sexual men to relax and meet [...]
More info on Outside Belfast