Touch of London on PinkUk    Touch of London gay massage website
This advert has been viewed 1,379,316 times since 15 July 2019.
Would you like your advert here?

Just steps from Bloor-Yonge Station, our historic guest house in downtown Toronto is just a short walk down a quiet tree-lined street here in the [...]

We have 1 Towns/Cities in Nevada. 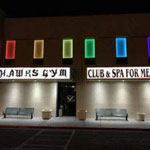