Popper Super Shop on PinkUk    POPPERS SALE UK ONLY website
This advert has been viewed 890,550 times since 09 November 2020.
Would you like your advert here?

We have 1 Towns/Cities in Texas. 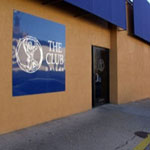 Updated: 14 May 2021
Club Dallas is located at 2616 Swiss Avenue, just steps from the Swiss Avenue Dart station. Club Dallas provides an immaculate facility that caters to your desires. Enjoy sunning by our outdoor [...]
More info on Club Dallas