Esmale Limited on PinkUk    ESMALE, Gay Adult Super Store
This advert has been viewed 1,827,263 times since 16 June 2020.
Would you like your advert here?

Just steps from Bloor-Yonge Station, our historic guest house in downtown Toronto is just a short walk down a quiet tree-lined street here in the [...] 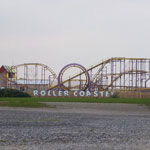 Updated: 31 Jan 2021
In and around toilets at Amusement Arcade near pier. It's easily missed because you have to go down a pathway to the toilets but there is generally some action along the pathway and in the toilets.
More info on Pleasureland