Gay/LGBTQ+ shops and gay friendly shops in the UK & round the world. Search our international list to find the gay shop at your holiday destination. 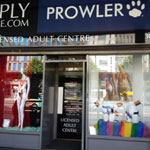