Touch of London on PinkUk Touch of London gay massage website
This advert has been viewed 639,859 times since 15 July 2019.
Would you like your advert here?

We have 4 Regions in Poland.

We have 1 Towns/Cities in Warsaw. 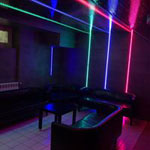 Updated: 07 Jun 2019
Sauna Galla Club is the oldest LGBT place in Poland, opened since 1995 and is constantly developing to meet even the most sophisticated tastes of its guests. Thanks to the unique atmosphere and [...]
More info on Galla Sauna Club