Esmale Limited on PinkUk    ESMALE, Gay Adult Super Store website
This advert has been viewed 1,025,923 times since 16 June 2020.
Would you like your advert here? 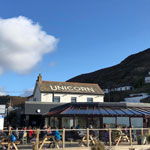 Updated: 26 May 2021
Welcome to The Unicorn on the Beach. We are the team behind independent neighbourhood bar and restaurant Pedler and when we stumbled upon The Unicorn at Porthtowan beach, it was love at first sight, [...]
More info on The Unicorn
Booking.com
Contact us | Advertise with us | Accessibility | Privacy policy | Testimonials | Donate | © 1999 - 2021
Share  |