Touch of London on PinkUk    Touch of London gay massage website
This advert has been viewed 1,396,546 times since 15 July 2019.
Would you like your advert here?

We have 2 Towns/Cities in Lower Saxony.

We have no future LGBTQ+ prides/events in Germany, Lower Saxony 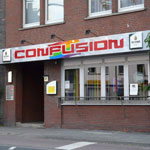 Updated: 01 Oct 2021
The Confusion gay bar is centrally located between the train station, Salzmarkt, and Neumarkt. Cozy gay pub in the heart of Osnabrück with many events such as karaoke, motto parties, cool drinks, [...]
More info on Confusion Open Gay Pub
Booking.com
Contact us | Advertise with us | Accessibility | Privacy policy | Testimonials | Donate | © 1999 - 2021
Share  |