Esmale Limited on PinkUk ESMALE, Gay Adult Super Store website
This advert has been viewed 275,825 times since 16 June 2020.
Would you like your advert here?

We have 1 Towns/Cities in Andalucia. 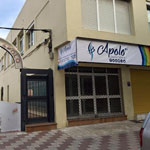 Updated: 06 Jun 2019
Apolo Sauna Cabaret is a new concept of sauna for gay people, located in Torremolinos (Málaga), in the Costa del Sol. Our facilities, new and modern, have a public of all ages, who come to enjoy the [...]
More info on Apollo Sauna Cabaret