PinkUk has 3 gay saunas/bars in Czech Republic and 177 Worldwide, in 34 countries.

Very Gay Friendly Doonbank Cottage Bothy: Whether you're looking for a one night business stopover, a couple of nights to attend a wedding at the [...]

We have 1 Towns/Cities in Olomouc.
Stare Mesto (1 venue) | 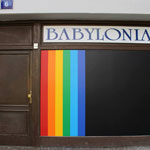 Updated: 08 Sep 2021
Babylonia was opened in 1998 and completely renovated in the spring of 2013. Very popular sauna on a total area of 500m2 including a dry sauna, 2 steam baths with a maze and several relax rooms with [...]
More info on Babylonia