Ty Rosa Boutique B&B on PinkUk No1 Hind Stile Boutique BnB website
This advert has been viewed 209,770 times since 30 April.
Would you like your advert here? 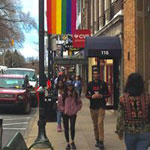 Updated:
05 May 2019
Since 1984, Chumley's the most chill bar in town. Welcoming and diverse, we're famous for fabulous cocktails and a fantastic selection of interesting bottled beer and local drafts. Just ask... our [...]
More info on Chumley's