Cityrubs.com Gay Massage Directory website
This advert has been viewed 10,686 times since 22 September 2020.
Would you like your advert here? 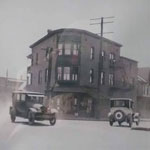 Updated:
12 Jun 2020
Escapade; The building we are in is well over 100 years old. Once a railroad hotel that used to reside on the opposite side of the street in which one half is still there (the sister building). [...]
More info on Escapade