Ty Rosa Boutique B&B on PinkUk No1 Hind Stile Boutique BnB website
This advert has been viewed 199,533 times since 30 April.
Would you like your advert here?

We have no future gay prides/events in USA, Kentucky 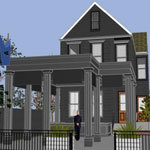