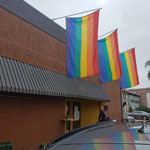 Updated:
11 Jun 2020
Club San Diego is a health club where men can enjoy and connect with other men in a safe environment permitting nudity, fantasy and feelings to be explored. Come make a new friend for an hour or a [...]
More info on Club San Diego