Esmale Limited on PinkUk ESMALE, Gay Adult Super Store website
This advert has been viewed 174,957 times since 16 June 2020.
Would you like your advert here? 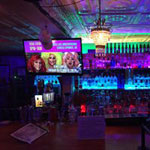 Updated:
19 May 2019
Eureka Live are a diverse dance club. They have a large dance floor, crazy hats and hula hoops for your pleasure. The inside bar is still a smoking establishment. We have two large smoke filtration [...]
More info on Eureka Live