Ty Rosa Boutique B&B on PinkUk No1 Hind Stile Boutique BnB website
This advert has been viewed 327,428 times since 30 April 2020.
Would you like your advert here? 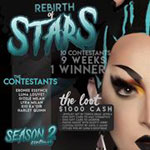 Updated:
19 May 2019
Scottsdale’s Best Gay Bar BS West was established in 1988 and remains Scottsdale’s exclusive 21+ LGBT bar and nightclub. Right in the middle of Old Town Scottsdale. Their most popular drink [...]
More info on BS West