We have 3 Regions in Netherlands.

We have 2 Towns/Cities in Limburg.

We have no future LGBTQ+ prides/events in Netherlands, Limburg 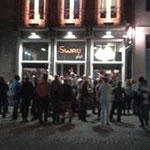 Updated: 10 Jul 2021
Sway Café is an open-minded café located in a monumental building in the center of Maastricht. A wide range of people come together here to have a drink, catch up and / or swing / 'sway' until the [...]
More info on Sway Cafe
Booking.com
Contact us | Advertise with us | Accessibility | Privacy policy | Testimonials | Donate | © 1999 - 2021
Share  |