Esmale Limited on PinkUk ESMALE, Gay Adult Super Store website
This advert has been viewed 276,253 times since 16 June 2020.
Would you like your advert here?

We have 1 Towns/Cities in Naxos.

We have no future LGBTQ+ prides/events in Greece, Naxos 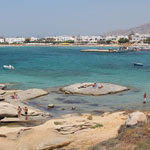 Updated: 18 May 2020
Agia Marina is a semi-nudist beach which attracts many gay people. It used to be an exclusively nudist beach, but these days the nudist part starts after the end of the umbrellas. Here you can [...]
More info on Agia Marina Beach