Popper Super Shop on PinkUk POPPERS SALE UK ONLY website
This advert has been viewed 640,609 times since 09 November 2020.
Would you like your advert here?

We have 5 Towns/Cities in Crete.

We have no future LGBTQ+ prides/events in Greece, Crete 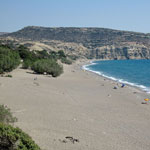 Updated: 16 May 2020
Komos Beach is a Paradise-like sandy beach, quite well-known, situated near Matala and a village called ‘Pitsidia’. The majority of the gay travellers and locals gather at the nudist part of the [...]
More info on Komos Beach
Booking.com
Contact us | Advertise with us | Accessibility | Privacy policy | Testimonials | Donate | © 1999 - 2021
Share  |