Esmale Limited on PinkUk    ESMALE, Gay Adult Super Store
This advert has been viewed 2,510,797 times since 16 June 2020.
Would you like your advert here?

LGBT Foundation is a national charity delivering advice, support and information services to lesbian, gay, bisexual and trans (LGBT) communities. LGBT Foundation believe in a fair and equal society where all LGBTQ+ people can achieve their full potential.

You can support them by buying a pretty funky rainbow multi-lead charger, see more below.

LGBT Foundation believes in a fair and equal society where all LGBTQ+ people can achieve their full potential. LGBT Foundation provide a wide range of services to support lesbian, gay, bisexual and trans people. If you need to speak to someone for more support you can contact LGBT Foundation on 0345 330 3030

LGBT Foundation's helpline celebrated its 45th anniversary in January 2020, and provides thousands of hours of support and advice to LGBTQ+ people who feel that they may have nowhere else to turn. The helpline has been running for over 47 years, and is staffed by a team of dedicated staff and volunteer operators all of whom receive extensive training and support.

LGBT Foundation helpline is non-judgemental and offers support and advice on a range of topics such as.

LGBT Foundation understand how anxious you might feel reaching out for support. When you call, you will find someone on the other end of the line with a friendly voice and a listening ear. 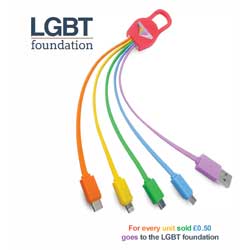 The background to the rainbow charger

Adam (we have changed his name to protect his anonymity) tragically lost his friend Jake (his name also changed) to suicide after he struggled for years with issues related to his sexuality and his fears that he will 'bring shame' and be rejected by his family.

Adam: "I went to school with Jake in the late 1980’s. We were in boarding school together and to be honest life in and out of school was very good. After school, as many people do, we went our separate ways in life. A few years later, we reconnected again on Facebook. We met up and remembered the old times and was great to look back and catch up."

"It was at this point that Jake finally came out to me and told me that he was gay. I asked why he had never told me before. He said it was a time in his life where he didn't know what/where/when to tell me. Boarding school can be an extremely difficult place, but I had no idea that he was struggling."

"We continued to meet up in the future years, and in 2008/9, I was informed that Jake had taken his own life. He had left me a letter which was sent to me. In the letter he explained how he had felt over the years, how he felt now."

"He was in a dark place as he hadn't told his family and to use his own words, I am fed up of going to weddings and then being quizzed after by the family when will I be getting married."

"He explained that he still hadn't told his parents or sister and they have no idea. He said he didn't want to shame his family. Which is crazy. He didn't even tell me which is the heartbreaking for myself."

"He is a great guy, and very much missed. I just wish he had the support of an organisation like LGBT Foundation. No one should feel that their only option is suicide."

Adam was shocked and upset by all this, so invented the Rainbow Charging Cable. He went to DP Building Systems, who are a licensed partner of LGBT Foundation to produce these cables. - a new 5-1 rainbow charging cable in order to raise money for LGBT Foundation to continue its work in supporting LGBTQ+ people and helping to end needless LGBTQ+ suicide."

Help support LGBT Foundation, for less than the price of a pint, and you get a fab 5-in-1 multi USB charging cable Pride Inspired Fast Charger Cable- LGBT Foundation Donation Opportunity as our product of the month, August 2022.