Home > Out on the town > Gay clubs > Edinburgh gay clubs 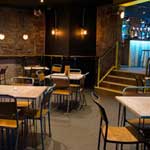 Updated:
02 Mar 2019
CC Blooms is Edinburgh's oldest gay bar & club. CC Blooms venue was founded by original owners Diane and Brian in 1994 and was named after Bette Midler’s character in the film Beaches. In 2008, [...]
More info on CC Blooms