Cityrubs.com Gay Massage Directory website
This advert has been viewed 18,976 times since 22 September 2020.
Would you like your advert here? 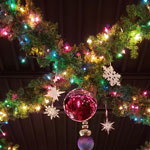