Esmale Limited on PinkUk ESMALE, Gay Adult Super Store website
This advert has been viewed 458,155 times since 16 June 2020.
Would you like your advert here?

We have 4 Towns/Cities in Herefordshire. 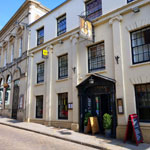 Updated: 26 Jun 2020
The Kings Head Hotel is situated in the most picturesque street in the market town of Ross-on-Wye, this 14th century hotel maintains many of its original features, including oak beams and a large [...]
More info on The Kings Head Hotel