Esmale Limited on PinkUk    ESMALE, Gay Adult Super Store website
This advert has been viewed 1,035,010 times since 16 June 2020.
Would you like your advert here?

We have 3 Towns/Cities in Valencia.

We have no future LGBTQ+ prides/events in Spain, Valencia

Updated: 11 May 2020
Canibal Pub is a gay bar in Alicante, serving delicious food and drinks. For the location is very reasonably priced bar. Canibal Pub is very popular and a variety of acts/performances and is popular [...]
More info on Canibal Pub 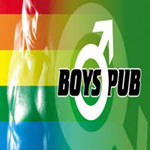 Updated: 03 Sep 2021
The Pub Boys was founded in June 1995 by Manuel Valero and Mario Cascales, in order to help meet the demand for this type of establishment in the province of Alicante. The atmosphere of the pub is [...]
More info on Pub Boys
Booking.com
Contact us | Advertise with us | Accessibility | Privacy policy | Testimonials | Donate | © 1999 - 2021
Share  |