We have 2 Towns/Cities in Basque Country.

We have no future LGBTQ+ prides/events in Spain, Basque Country 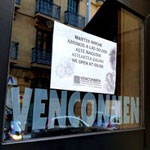 Updated: 07 Feb 2021
Sauna Venconmen is a gay sauna in the centre of the city. In a discreet street in the old part. With numerous public car parks less than three minutes away and with nearby buses. Reduced prices on [...]
More info on Sauna Venconmen
Booking.com
Contact us | Advertise with us | Accessibility | Privacy policy | Testimonials | Donate | © 1999 - 2021
Share  |