Esmale Limited on PinkUk ESMALE, Gay Adult Super Store website
This advert has been viewed 280,746 times since 16 June 2020.
Would you like your advert here? 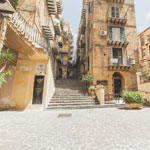 Updated: 29 Apr 2020
Camere a Sud located 3.1 miles (5 km) from the Valley of the Temples, B&B Camere a Sud is in the centre of Agrigento. It offers free Wi-Fi and air-conditioned rooms with a satellite flat-screen TV. [...]
More info on Camere a Sud