Pink UK website
This advert has been viewed 225,328 times since 16 February.
Would you like your advert here?

Below are the countries around the world where Pink UK has the most gay venues for. Pink UK do have gay venues listed for many more countries and these can be found via the site menu above. We have 2,630 listings in 55 countries.

We have 5 States/Regions in Australia.

We have 4 Towns/Cities in Queensland. 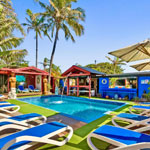 Updated:
16 Jun 2019
Hideaway Noosa is an intimate, chill and relax private resort, marketed to the Gay and Bi male community. Set in lush and tropical gardens with towering palm trees only a short walk away from the [...]
More info on Hideaway Noosa Men's Only Beach Resort