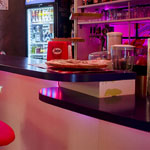 Updated:
29 Apr 2020
SSOCIATION METRÒ VENEZIA CLUB Where relax and fun meet, all in equipped and comfortable areas and in the most complete cleaning. You have at your disposal 1 hot tub, two separate temperatures [...]
More info on Metro Venezia Club

Other venues in Veneto: Clubs | Saunas